Gamerdisco DANCES into the new decade at Queen of Hoxton with an electronica-focused extravaganza.

This year, they’re going bigger, bolder, and louder - with a focus on bringing you the best gaming music has to offer, featuring a host of new and exciting talents - not to mention some Gamerdisco favourites - and of course, your usual epic gaming tournaments (of course with awesome prizes!)

PLUS, special drinks deal - 5 bottles of Birra Moretti for £20!

2xAA harnesses the low-fi power of the Nintendo Game Boy and various other portable hardwares to create flowing house and techno sets.

He also produces eye catching visuals using nothing but JavaScript.

MORE TO BE ANNOUNCED SOON!

Just because we’re going big on music, doesn’t mean our tournaments on the night will be getting any smaller! On this evening, we’ll have some absolute classics...

Nidhogg - the epic award-winning fencing tug-of-war, full of graceful acrobatics and clumsy stabs. IRL yelling and excitement may occur, in this ultimate two-player showdown of fast-paced fencing and melee attacks.

2nd Tournament to be announced soon!

Also, a host of Retro Games will be available for freeplay all night long! 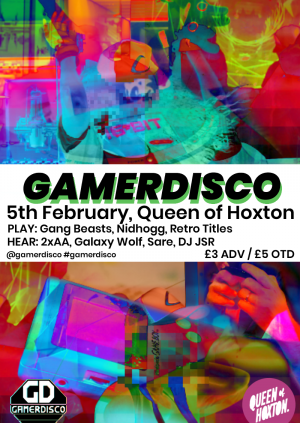