Heart of Brass is BACK for a spine-tingling Halloween special! This October, we welcome 11-piece brass band BYOB (Bring Your Own Brass) to sound-track an all American Halloween party like no other… Ghouls, perverts and freaks of America, grab your blondest wig (but no grabbing pussy), best botox or scientology textbook – this is The Real American Horror Story. The Apocalypse is upon us and all the worst celebrities have been unleashed from the gates of hell – Paris Hilton and Lindsey Lohan roam wild, Justin Beiber’s mama still doesn’t love you (and she loves EVERYONE), while the Kardashians are running an international cult of clowns, villains and Coachella goers. Head down to the basement of the Queen of Hoxton for the Donald Trump Dungeon of Dirty Delights where you’ll find erotic arm massages, neon face painting and the terrifying Misfortune Teller who will predict all of your deadliest fantasies. Look out for some of the trashiest celebs who will be lurking around every corner with a pack of playing cards – draw a Joker and win five free shots. Will you survive the night? Free entry before 9pm. Dress for the end of the world….

Heart of Brass will bring you the best in live Brass Music and Carnival sounds to our basement, with Bring Your Own Brass (live brass band) on headliner duties for this month! They’ll be playing their Brass Heavy take on feel-good classics, original songs and mashups alongside our carefully selected roster of residents playing sweaty sounds from across the globe including House, Disco, Funk, Latin, Afro and Dub cuts from carnivals around the globe.

On the Ground floor, the house party ensues, with the omnipresent Sacha (Clarks) holding fort behind the both, playing the best in Hiphop, R&B, Garage, Reggae, Grime and beyond…

This month HOB is bringing you BYOB to Queen of Hoxton for a Halloween Special of brass based misbehaviour!!
Date: Sat 26th October
Tickets: £5/£8/£10 ADV. MORE OTD

BYOB (Bring Your Own Brass) are an 11-piece brass band who have been tearing up festival stages with their original mix of hip hop beats, heavy riffs and dancefloor grooves.

Forged in the fires of Passing Clouds, BYOB regularly packed out the legendary venue well into the early hours. Since then BYOB have been whipping up a storm at festivals and venues across the UK and Ireland. In 2017 they headlined the opening night on the main stage at Glastonbury’s Shangri-la; they have packed out stages at Boomtown, Shambala, Lovebox, Citadel, Hootananny and the Scala. With their first EP about to drop, this is a live band you can’t afford to miss. 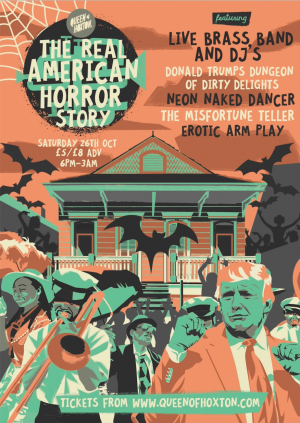