This November Midnight Funk Association returns to Queen of Hoxton with a very special event in partnership with Bulldog Gin!! As well as a super special headline DJ we’ll be serving a new special menu of Bulldog Gin & Tonics as well as giving out Bulldog Gin goodies all night long!

To celebrate this collaboration we are bringing one of our favourite female DJs to emerge into UK dance scene in recent years, Sophie Lloyd (into our basement club for a very special House and Disco set!

London-based Sophie Lloyd radiates dancefloor magic behind the decks and in the studio, producing “happy music” as an antidote to the world’s pervading doom and gloom. She’s a DJ with over 15 years experience, an authoritative depth of musical knowledge and an innate talent for creating an atmosphere with music. Summoning the power of the most joy-filled sounds, Sophie’s affinity for disco, soul and house music has seen her play alongside the likes of Mark Ronson, Horse Meat Disco, Purple Disco Machine, Dimitri From Paris and Todd Terje and we cant wait to welcome her to MFA!

MFA is a party for Shoreditch paying homage to all ends of the house & disco spectrum, inspired by the lights, sounds and sites from 1970s New York Loft Discos to modern day warehouse raves, MFA is the new disco party for girls, boys and everything in between. Boasting a lineup of largely Female residents DJs and Drag queens you’ll be taken on a journey of Funkadelic delights and Disco dancing into the early hours.

Don't expect the cheesy stylings and bad nostalgia of the disco nights your dad goes to twice a year - MFA is a party to bring you fresh, forward-thinking beats and all the gems of house & disco's first wave that got this whole clubbing lark moving in the first place.

At the midnight hour, the MFA comes alive. Expect a flurry of light, sound (& even a cup of funk juice) as Queen of Hoxton is filled with treats for the mind and soul, and ears.

Alongside our headline set from Monki, we have residents Alieen & Lou Ellis (Virgo Festival) mixing up a storm as they ply our usual trade of House, Disco, 70s and 80s dance classics and more!

On the ground floor we have Queen of Hoxton resident and BBC radio DJ Rowena Alice - DJ playing a mixture of party music to get your feet moving, as well as some dance classics and the usual party bangers you can always expect from Queen of Hoxton.

Felix Le Freak will be bringing her own debauchery to our new basement room 2, alongside friends you can expect vougeing, lip sync and a whole lot of cheesy tunes to get you dancing the night away!

So join us for party music through the ages from: 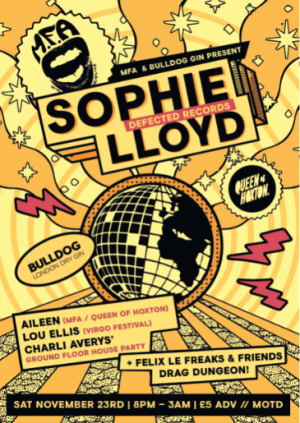