This July Queen of Hoxton turns 10!!!!!! Yeah, you heard right, our East London venue is fast moving from adolescence into a fully formed childhood and while we can’t remember our own 10th Birthday Parties very well, we expect there was face painters, cake, balloons, family, friends, gifts and of course music a plenty!

And that’s what you can expect from our birthday party here at Queen of Hoxton as we team up with East London’s Biggest Garage brand ‘Has it Come to This’ for a night of UKG and Bass with headline sets from two of the biggest names in UKG – Zed Bias (History of Garage Set) & Plastician (Bass Set). These are genuinely two of the biggest names in the scene and we cant wait to welcome them both down to our hallowed basement for a night of pure fire!

Alongside them our HICTT residents will be playing all the tunes you’ve come to expect as well as all those you haven’t. Expect a night ‘loaded’ with old-school classics and underground sounds, sprinkled with ‘a little bit’ of cutting edge future garage, and you've got yourself a party worth writing off Monday for!

Taking you back to an era before dubstep, grime and electro when garage reigned supreme, Has It Come To This will step back to the early 2000’s heling you relive your youth as we play the sexiest UKG licks and dirty basslines that sound tracked your first trip to second base in 2003, and that will make you fall in love all over again! These are the era defining sounds that clubland forgot, but we never did!

On top of this we will be providing the birthday flavours with, face painters, cake, balloons, confetti and gifts from us to you!

Zed Bias is an electronic music pioneer who has traversed genres throughout his career with ease but it’s UK Garage where he made his mark with countless classics including the genre-defining “Neighbourhood”. Expect Zed to deliver a fierce, bass-laden mix of UK Garage anthems and rarities as he takes us on a journey through the genre.

At the forefront of establishing and being a true pioneer of not just London’s Grime scene, but also the dubstep scene, who better to take us on a journey through UK underground dance music. Plastician might be the epitome of the pirate radio era; with him unearthing new and exciting sounds throughout his 14 year stretch at the one and only Rinse FM. Come through and watch him fuse the link between South London’s dubstep and East London’s grime 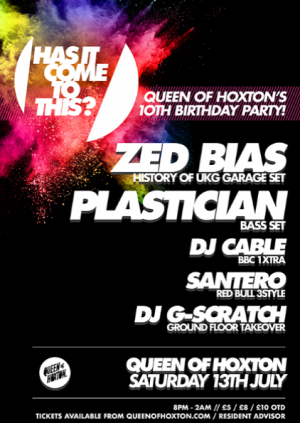