Heart of Brass is BACK! This month we’re bringing you Deadbeat Brass to Queen of Hoxton for a night of brass based misbehaviour!!

For us Anglo-Saxon folk, it's pretty much always cold, wet, dark and everyone looks miserable.... And yet on the opposite side of the globe in New Orleans, the Caribbean and South America, its 100% party time - semi-naked people, wasted on Caipirinhas and frozen Daiquiris, dancing in the street to feel-good Funk, Soul, Latin and Jazz beats for days on end, and we thought why should they have all the fun…

So, here's the deal - we can't promise to bring the sunshine.... but we've sorted everything else!

Every other month Queen of Hoxton will enter the new season with a 3-floor house party extravaganza hinting at warmer climes from around the world. And Heart of Brass will bring you the best in live Brass Music and Carnival sounds to our basement, with Bring Your Own Brass (live brass band) on headliner duties for this month!

They’ll be playing their Brass Heavy take on feel-good classics, original songs and mashups alongside our carefully selected roster of residents including J-Felix (Tru Thoughts) and DJ Mo Fingaz (Main Squeeze) playing sweaty sounds from across the globe including House, Disco, Funk, Latin, Afro and Dub cuts from carnivals around the globe.

On the Ground floor, the house party ensues, with the omnipresent Dj Odin (Rizzle Kicks Tour DJ) holding fort behind the both, playing the best in Hiphop, R&B, Garage, Reggae, Grime and beyond…

This will all be topped off with over the top festival décor and production as well as face painters, giveaways, inflatables and much much more….

Deadbeat Brass are a 10-piece Riot-Brass band from Huddersfield, mixing New Orleans Street Jazz with Grunge, Metal, Latin and their own brand of Riot-Prog. The band started in 2016 and has since performed with the Hot 8 Brass Band, The Apples and more recently with Das Brass and Craig Charles. The band’s debut album ‘CHARGE!’ was released in 2018 with another in the pipeline in 2019. 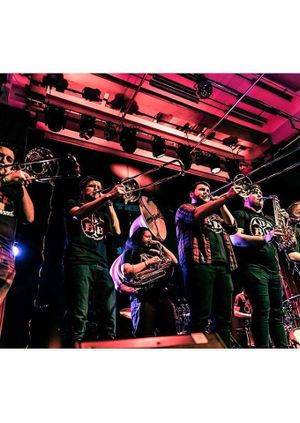